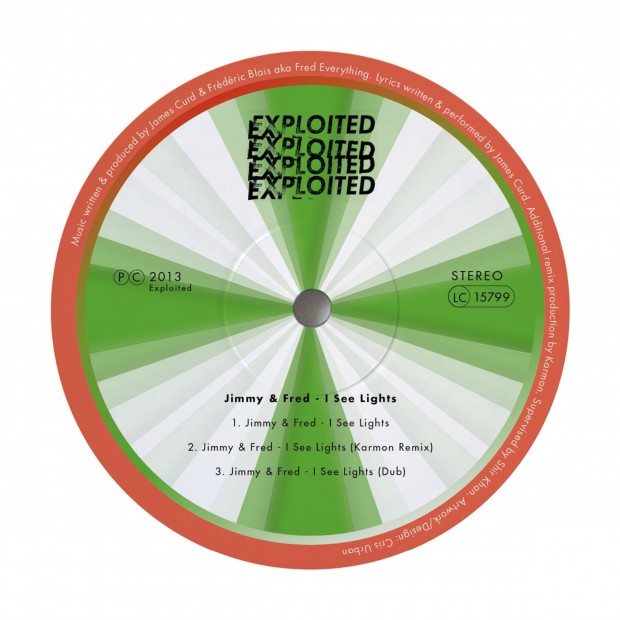 Get it at Beatport here

James Curd is back on Exploited.
This time James hooked up with Fred Everything from Montreal.
Together they are Jimmy & Fred who offer the indie-sounding, oldschool disco infused track I SEE LIGHTS (alongside a massive remix by Karmon), that is sure to tempt the ears of many.

Fred is a key player in the world of house music and with 13 years in the music business and over 100 productions to his credit, he shows no sign of stopping.
In the early 90s, he started playing live in raves and clubs in Canada. He was then known as “Everything,” because his live sets could range anywhere from techno to house, ambient and even drum and bass.
Tired of carrying his equipment around, mainly a TR909 and a SH101, he started DJ’ng and changed his name to Fred Everything.
James Curd began his DJing career in Chicago when he was only fifteen years old. Being underage, Curd was snuck into events to play at raves and clubs he was not legally allowed in. He played along side some of electronic’s most respected acts and DJs.
As ‘Greenskeepers’ Curd released an array of music on Derric Carter’s Classic Records. He made his mark on the dance music world by infusing swing music and Chicago house to invent the term G-Swing, being short for Greenskeepers Swing. Around this time he also started a record label by the name ‘Greenskeepers Music’.
Under his solo name James Curd released on DFA, Permanent Vacation, Eskimo and Bang Gang to name a few. He has remixed Hercules & Love Affair, Juan Maclean, Groove Armada, Poolside, Flight Facilities and DJ CAM.